This Article, along with every kudos and positive comment, is dedicated to a designer of the Microsoft Hololens, Mike Ey, who was tragically killed in a fatal car accident in March of 2015. Our condolences go out to his family and friends.

Gaming began as a pass time. Those who dedicated hours, weeks, months, and even years to it were considered lazy and unmotivated. Look how far we've come in such a short time though. From the moment I was born as a gamer, until now, I've seen this industry grow, expand, and mature faster than any other medium of entertainment.

This evolution was brought about through a number of various factors. Technology grew, that certainly helped, but more than that, people continued to push the boundaries of what gaming could offer. We took that new technology and we ran with it until our legs gave out.

Gaming is more than a hobby. It's an inspiration, a powerful form of human expression and artistic prowess. It has made us better storytellers, better problem solvers, and all-round better people. For those who seek to push the boundaries even further, I salute each and every one of you.

Gaming is immortal, but we are not. This sad truth was revealed once more when Mike Ey was tragically killed in a hit-and-run car accident in March of 2015. Mike was one of the designers on Microsoft's HoLolens. He was a member of an elite team that sought to bring about the next evolution in both computing and gaming.

His demise was sudden and unfair as many tragedies are. The reckless driver was eventually caught and arrested, but the world of gaming has still lost one of its pioneers..

In wake of this news, I decided to look back on the evolution of Microsoft's augmented reality, on the technology itself, and on the coming war between virtual reality (VR) and augmented reality (AR). Microsoft may be many things, but they have never been willing to let innovation go to the wayside.

An Examination of Augmented Reality

We've all heard of the Oculus Rift I imagine, which is a virtual reality headset. This type of experience places you entirely in another setting. It could be argued that this is total immersion, but today's technology, not to mention our minds, still know that it isn't real.

What about taking what you see in front of you and altering, or say, augmenting it? The idea may seem odd but it's been around in one form or another for some time now. Plenty of smartphone games use it, and several other consoles and handhelds have used it as well.

Usually we look through a camera into an altered view of our world. Your living room is still your living room, but now it has, say, a tiny animal rampaging around it? Or perhaps your house is suddenly filled with flying spaceships or ghosts. Again, you know it is isn't real, but your brain still feels wonder at seeing the world you know differently for once.

Take out the camera, strap on the HoloLens. Now, imagine that you could not only see these things, but interact with them. Yes, it sounds crazy, or maybe not, depending on how tech savvy you are, but in either case it is a real thing. It doesn't only apply to games either. AR technology has a variety of uses:

Changing the world in front of you opens up numerous possibilities for what can be accomplished. Xbox One tried to be a jack-of-all-trades but it left gamers behind in the process. With augmented reality, Xbox Two could bring everyone along and not only improve our gaming experience, but also our everyday lives.

This is all how the technology currently stands, but where is it heading? Well, AR is just now starting to gain ground through breakthroughs like Google Glass and Microsoft's HoloLens. The idea here is to take what we see in the digital space, and marry it to what we see around us. Digital and physical boundaries break down as we experience everything at once, and we have total control over it all.

If Xbox 2 wants to do everything, this kind of technology could give it the backbone and the capabilities to do so.

What is The HoloLens?

The wearable visor that we know as the HoloLens is the culmination of various other tests and prototypes. Evolution is, after all, a crucial aspect of gaming as a whole. One could argue that the Kinect (originally Project Natal) was part of this process. The idea here was more of a motion controlled game, but these motions then translated into a little-known project called RoomAlive.

RoomAlive began life as a tech demo called "IllumiRoom". The idea here was to use Xbox 360 Kinects to examine a room and project the the game across the entirety of the surrounding area. Similar to an alternate reality visor, minus the facewear. The idea was shown, but then it went quiet. It resurfaced again in 2014 as RoomAlive with some added features.

The resurfaced technology included more features and better motion tracking, but it still required surfaces to project the images onto. Now we've reached the HoloLens, and these concepts finally come to fruition.

As a version of the newly minted wearable technology that we've seen lately, this visor allows you to see an augmented version of the world around you. You can reach out and interact with it, move your head and have it follow you, and more. This works by creating 3D images in front of you and tracking your movement, allowing you to walk around them, and interact with them using your hands.

The glasses will also scan your room, using pieces of furniture or tables as places to create the 3D images or floating screens you see before you. There are numerous applications for such a device, but Microsoft has made it clear that they aren't alienating gamers this time around. At the 2015 Game Developer's Conference, the chief of Xbox, Phil Spencer, took the stage to talk about the HoloLens.

"Gaming and entertainment are going to be critical to introducing consumer to such a radically new experience," he said. Furthermore, a Microsoft press release also added to the optimistic future of the HoloLens in terms of gaming: "While there are going to be many uses and industries that take advantage of Microsoft HoloLens and everything that holographic computing has to offer, gaming is a huge opportunity."

As the technology continues to come into its own, Microsoft plans to embrace other developers in creating experiences for their AR eyewear.

What Can the HoloLens Do?

So far we've seen the HoloLens used to play Minecraft in a whole new way at the E3 2015 Microsoft press conference, but now there are new things being shown. Varun Mani, a project manager on Microsoft's HoloLens team, recently uploaded a video of him using the HoloLens to stream Halo 5 onto a screen that only existed through his eyes. Check out the incredible footage:

On the surface, this just seems like a neat feature, but it could lead to an entirely new version of Split-Screen multiplayer on Xbox 2. Imagine if you could still play in the same room with your friends and simply stream your game screen to the HoloLens form your home console, much like Sony's Remote Play on the PS4.

Another exciting development was the first display of a HoloLens exclusive game known as Project XRay. In this game you defend your living room or space of choice from invading robots. The demo showed a small stick that the player held, which transforms into a futuristic gun through the player's eyes when wearing the headset. 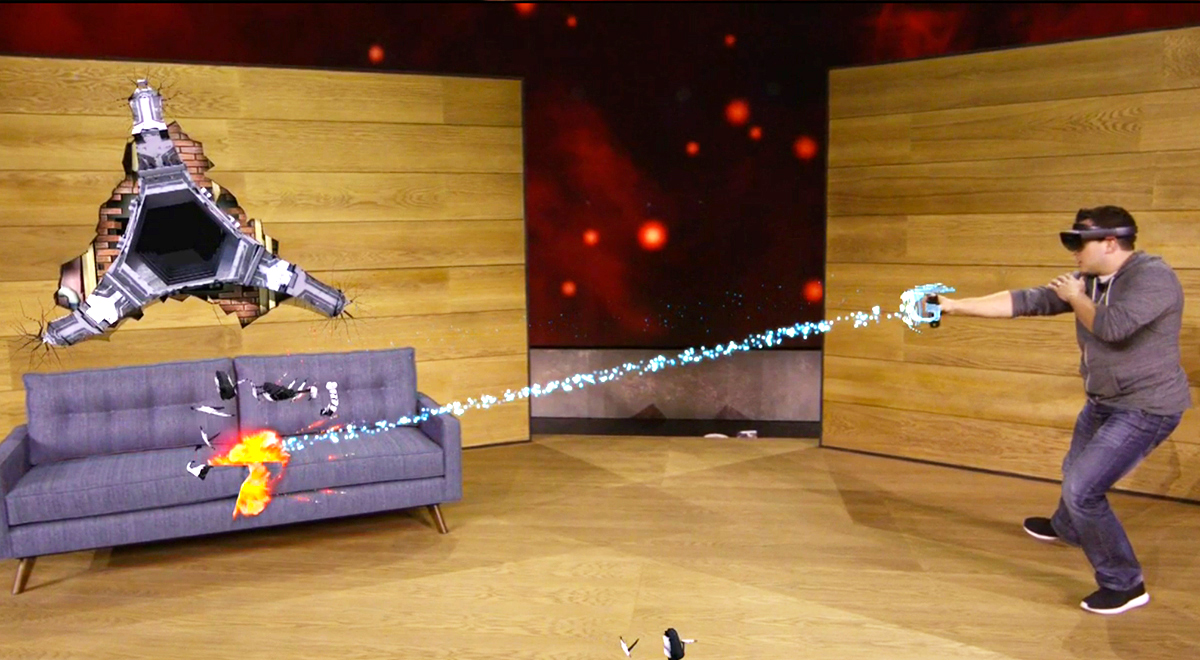 You aim and shoot as enemies come out of the walls (literally) and defend yourself for as long as possible. During this demo, Microsoft also announced that the HoloLens would begin shipping development kits out for $3,000 per device. Let's hope the final product doesn't cost this much, or the Xbox 2 will sell for a pretty penny.

AR Vs VR: Who Will Win Gamer's Hearts?

The Hololens set some serious expectations when it was revealed. These possibilities require the technology to evolve more than it currently has, which begs the argument that HoloLens will see its greatest years on Xbox 2.

The biggest uses of AR in our modern era are around efficiency and various industries besides gaming. Sure, there are AR games, but the spotlight has been on virtual reality, or VR, more so than usual. There's a reason for this: VR is still very much like the games we know and the ones developers know how to make.

VR is simply a more immersive version of the virtual world you experience on your television screen. The developers of the game have total control of what can and cannot happen. There's obviously exceptions to the rule, but nowhere near as many as those presented in the real world.

Since augmented reality changes the environment around you, a problem arises when you realize that you must move through that space to navigate in the game. Since your living room is the level, you only have that space, that reality to work with.

It's an argument that many make, and while valid, it simply showcases that technology isn't at the point where something like HoloLens can be used to its maximum potential. That doesn't mean that we won't have new innovations or changes within a few years though, which is why writing off AR now would be a crime at best.

I think virtual reality is going to remain in the spotlight for now, but I know that the work of Microsoft's team and Mike Ey's contribution are setting the stage for a quantum leap in how we perform our daily tasks and how we play our games.

Thanks as always for reading and remember to weigh in with your thoughts and opinions in the comments below!