The biggest leap from Xbox One to Xbox Two, it seems, is not going to be graphics. Game developers are already planning ahead to the next generation and the big quantum leap is set to be in the physics department. Yeah, I know, physics aren't very exciting, but hear me out. Up until now we've been focused on making our worlds look real, and we've made major strides in that regard. The thing we've been missing out on, though, is realistic physics that make the world feel real as well.

The Worlds of Xbox 2

The big keywords that Paul Ross dropped during his interview were "far more dynamic", "interactive", and "believable." These worlds will use not only increases graphical power, but also processing power to make the worlds of our games feel real. When I say "feel" I'm talking about being able to interact with it and change it in ways that convince you it's real.

We've been able to make things collapse, make thins explode, and make things burn, but just like the uncanny valley, we haven't been able to do it in ways that are indistinguishable from the real thing. If we intend to make things that pull us into their world, we need to have both the looks and the feel to match. 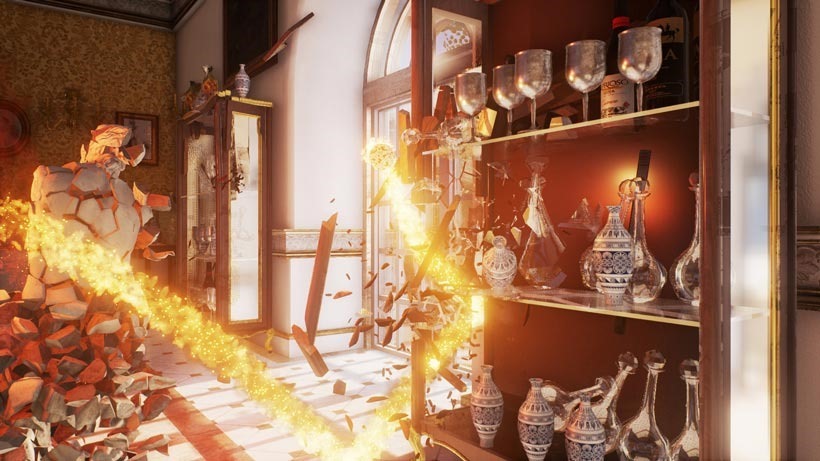 A Screenshot from Dangerous Golf via Three Fields Entertainment

Paul, and his team at Three Fields Entertainment, decided when they formed their studio that they would develop games that pushed the limits of what we can do now. During his interview with EDGE Magazine, Paul looked back on those early days, saying that he remembers "sitting there thinking, OK, what does a PlayStation 5 game look like? What does an Xbox Two game look like? And how can we start to build for that future now?"

His motivation behind physics engines stems from the fact that this aspect of gaming hasn't changed since he was working on the Dreamcast. "Physics engines haven't changed since I did the physics on TrickStyle for the Dreamcast. They're all about rigid bodies and solid objects. This is a real paradigm shift because it's about simulating physics at a molecular level. It's been a really hard problem to solve for quite a while."

Solving this problem means that worlds will be more interactive and believable. You will be able to interact with them, change them, and mold them in ways that we can't even begin to imagine. How does all of this start? With a little game called "Dangerous Golf."

Developing for the Future

Three Fields Entertainment recently released their first game. Entitled "Dangerous Golf" it's a physics-based game where players can destroy a multitude of environments including places like a gas station and a castle. The goal is to create a game where the physics are just as impressive as the concept.

"We set out to push the boundaries of a physics-based game and start to prepare for the next generation of machines, whenever they come, to try and be a small developer, but be on the cutting edge of tools and technology," co-founder Alex Ward said. "We want to dream big and try and push the boundaries."

"Physics-based games, there aren't many of them. The tools have just got to the point now where stuff like that is possible. So our genius tech team here were saying we should try a physics-based game, and we were looking at, you know, like any developer does, the stuff that people see in movies that's pretty mind-blowing and try and see if we can put that on the PC, PlayStation and Xbox."

Having put in some time with the game on Xbox One, I have to say, I can see their vision for a physics-based game in every tee and putt that I perform. The game itself revolves around physics, but the way they manifest themselves in the game is truly stunning.

It runs on the Unreal 4 engine, and while Xbox 2 will most certainly have a different engine for developer, the way items break, scatter, and shatter in the game is truly impressive. Not only that, but the graphics themselves are also very detailed, given the level of physics at play.

Now this is a fun and destructive golf game, not a AAA title, but still something unique. Three Fields Entertainment is only composed of eleven people, many of which worked on the iconic Burnout racing series, and for them to have created such a complex physics-based game is nothing short of impressive.

Imagine all indie games with this level of quality and physics. Now multiply that by tenfold for a massive studio working on a AAA game. It may be a destructive golf game, but I find that Dangerous Golf is immersive based entirely on the quality of its physics engine.

It just goes to show that graphics help, but having a realistic world that feels real when you interact with it is even more important. I've never thrown a golf ball through a ball room and destroyed a table full of plates, but Dangerous Golf's physics made me truly feel like I was there, causing that level of destruction.

It's encouraging to see developers taking a stance on the next generation. Most of us wouldn't have thought that physics could play such a key role in the future of gaming, but that's why they're the developers. They are the ones who dream the future. We're just here to speculate and experience what they create.

What do you think about this concept? Will improved physics define the next generation? Weigh in with your thoughts in the comments below!